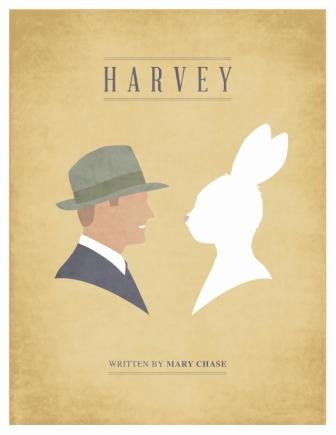 You may have heard the expression, “The inmates are running the asylum.” That couldn’t be more true as I get ready to portray psychiatrist Dr. William Chumley in the Albright Theater Company production of “Harvey.”

“Harvey” is a well-known Pulitzer-prize winning play written by Mary Chase and also a much-loved movie starring Jimmy Stewart. It’s the story of Elwood P. Dowd, a kind, eccentric, somewhat sloshed man whose best friend is a 6-ft., 3-1/2-in. tall invisible rabbit named Harvey. I think you already see why I love this funny story.

According to the script, “Dr. Chumley is a large, handsome man about 57. He has gray hair and wears rimless glasses which he removes now and then to tap on his hand for emphasis. He is smartly dressed. His manner is confident, pompous, and lordly. He is good and he knows it.”

Dr. Chumley directs “Chumley’s Rest,” the mental institution where Dowd’s sister hopes to have him committed. Along the way, Chumley becomes a supporter of the sanity of Elwood P. Dowd and a firm believer in Dowd’s friend Harvey.

I specifically wanted the Dr. Chumley role, though for “Harvey,” I would have been happy ushering just to be involved.  I got a photographer to take an actor “headshot” for me and I put together an acting resume. Gave it my best effort.  I’m very excited to have this part.

And in case you’re wondering, the director did cast me and my hair for this role. I know. I asked him. And yes, I actually do see the rabbit. What…I do, I freely admit it. In fact, Harvey is with me today. We’re going to lunch shortly.  He’s going to catch me up on the doings of our dear mutual friends Bugs, Velveteen, and Roger.

I’ve been rather partial to rabbits since making the acquaintance of one Dr. P.K. Smith, a New Zealand Red buck I looked after for a time some years ago. Friendly, intellectually stimulating, slightly mischievous creatures these rabbits, often misunderstood but with a unique take on the world and a willingness to share it. The rabbit Dr. Smith and I had some good times.

Oh. Excuse me a second.

Harvey sends you all his best and wonders if you would like to join us for dinner next week. Nothing formal of course…just having a few friends in.