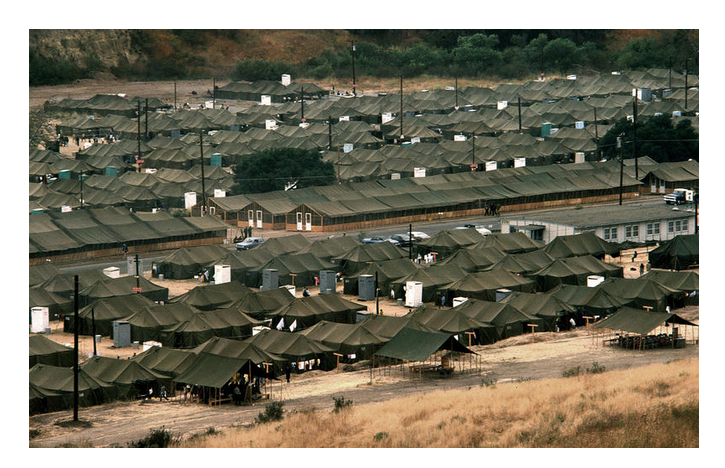 Camp Pendleton’s tent city. A photo by Don Bartletti from the LA Times article by Anh Do.

Yesterday was the Marine Corps birthday, and today, Veterans Day. And no, none of my four kiddos ever really asked me that almost cliche-like question, but I did do something. I am a “Vietnam Era” Marine veteran, because I served during the official February 28, 1961 – May 7, 1975 time period for the conflict. I enlisted in May, 1974 and actually reported for duty in September, 1974.

By then, the fighting was pretty much over, though all my combat training was still geared for the Vietnam conflict, complete with highly detailed village replicas and jungle tactics of the then enemy.  I am, of course, overwhelmed with gratitude that I was never deployed into actual combat, though obviously I enlisted willing to go. And I have incredible admiration for those who did serve in the jungles of Vietnam, the many who died and the ones able to return home.

I can’t fully express my extreme gratitude that I didn’t ever have to fire my rifle at anything other than a paper target. By the grace of God I didn’t see combat but I did, however, have a direct role of sorts in the Vietnamese conflict.

My first permanent duty station was Camp Pendleton, California. I arrived there in December, 1974 about a month after my 18th birthday. My military occupational specialty (MOS) was Supply Administration. In early 1975, hundreds of Vietnamese refugees following the fall of Saigon, were brought to Camp Pendleton. We had very short notice to prepare food and shelter. Tents were set up and food was brought in. My job was to bring in cases of food, called C-rations, or C-Rats (a better description) for the refugees.

As Anh Do described in an LA Times article, “It was late April 1975. Saigon was teetering. Almost overnight, refugee camps had sprung up across the U.S. to shelter an exodus of 100,000-plus Vietnamese. With just 36 hours’ notice, enlisted crews rushed around Camp Pendleton, sweeping the grounds, laying plywood floors, setting up hundreds of tents and thousands of cots, stocking pantries. Inside the tent city, the lost and the bewildered roamed, one of them describing their arrival “like coming to the promised land — just that we didn’t know what was promised or where we would land.”

I was one of the enlisted Marines rushing around. I remember arriving at the tent city and being awestruck. So many people. Such sad, scared faces. I had nothing to compare to this in my mind. I did my job and helped feed some refugees and hopefully helped them feel a bit more at ease.

Not the typical Marine Corps war story, but one I’m proud of.

For the rest of Anh Do’s article, go to this Los Angeles Times link: http://graphics.latimes.com/tent-city/

Interestingly, many years later, I met a young Vietnamese man at work. As we got to know each other, I finally asked him about his family. Turns out his parents had actually come through the Camp Pendleton refugee camp around the time I was there. Who knows? I may have actually brought them a smile (I most often got in trouble in the Marine Corps for smiling…Marines have nothing to smile about…everyone knows that), some delicious beef and rocks (mystery meat and potatoes), and a shit disk (a round chocolate bar), all included in the C-ration meals.