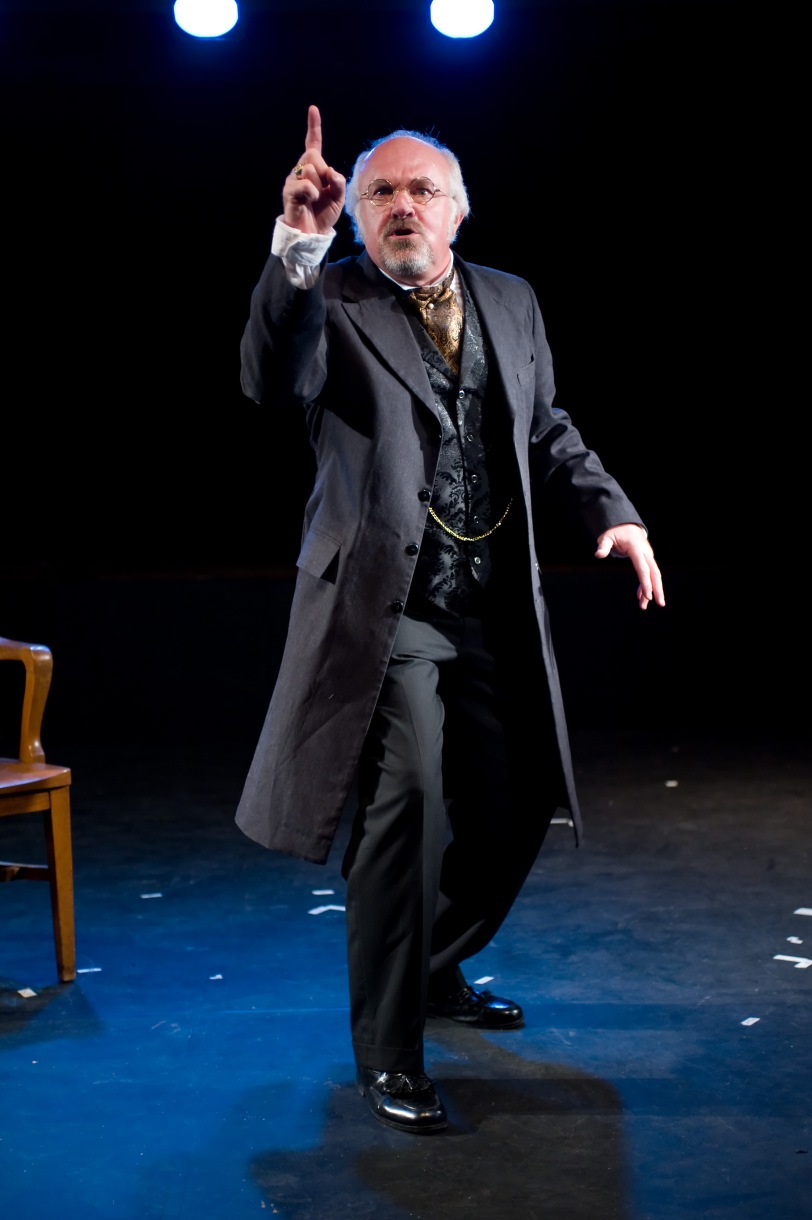 Me as Brother William Miller.

“The end is here…it strikes the hour!” So claims preacher William Miller as he prays and prepares for what he has predicted as the end of the world. So claims yours truly, William Boggs, as I prepare for what I know is the end of the “After The End of The World” play.

It is bittersweet. I have loved every minute of the many rehearsals and performances. It has been intense and a lot of work. My brain has been stretched and I have had the opportunity to use my whole box of creative crayons. I am always invigorated by that. I even juggled three balls on stage during one crazy set change! Juggling on stage? Dreams do come true.

Through all of it, I have made new friends and put myself in altogether new situations. It feels so good to learn! Enlivening to be sure. That said, I’m tired and in pain. Yes, pain. My understanding of the man William Miller required me to present him as very passionate. In the preaching sequence of my 20-minute monologue, Miller catches some air…yep, he goes airborne. Leaps. Several times. Can’t remember the last time I leapt. But I like leaping. And the flying part was fine. Landing, though, was a bit tough on my right knee. Ouch. Still, the show must go on (I’ve always wanted to say that). For the last three performances beginning tonight, Brother Miller will use a walker if he has to. He won’t. Next week, I will visit my doctor.

Along the way, I learned a new word, “dramaturgy.” I like that, too. According to Terry McCabe, “Dramaturgy is a comprehensive exploration of the context in which the play resides.” Comprehensive exploration—hmmm. That sounds like my own expression, full-contact creativity.  I did a bit of that as I dove headlong into learning about the man I portrayed, William Miller of Low Hampton, New York. It was rich and I want to share a little. 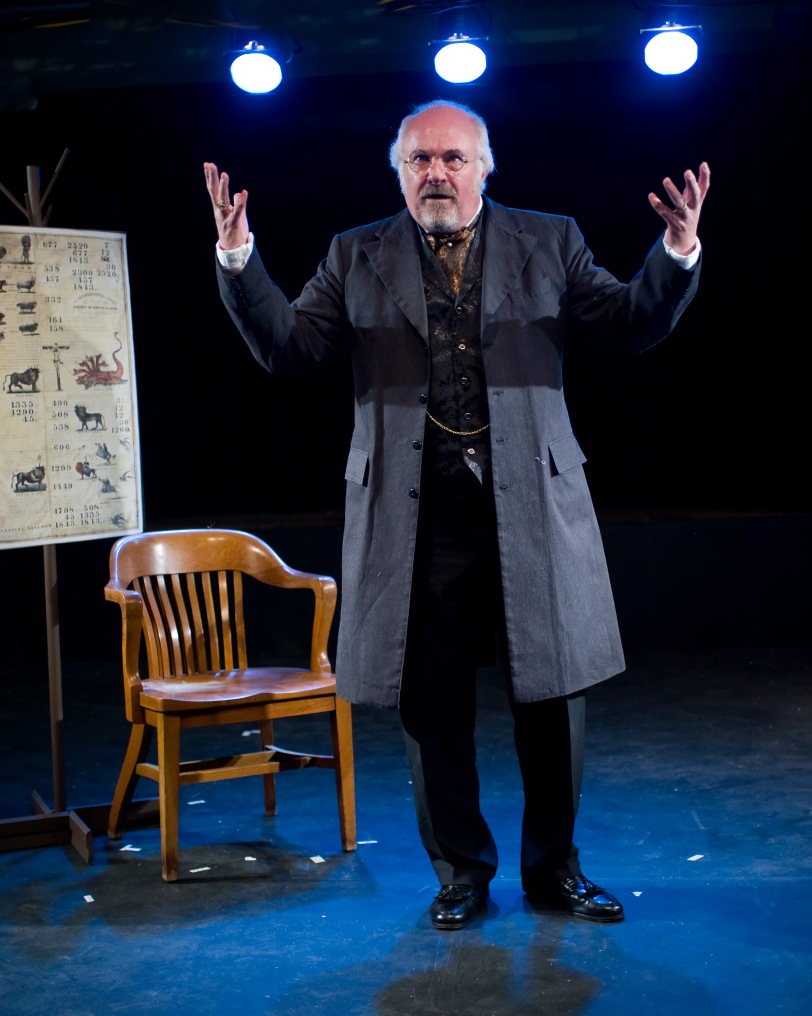 Miller was a household name in America in the mid 1800’s because of his wholehearted, carefully crafted predictions of the end. He was a reluctant and sincere leader, a very serious self-taught student of the Bible, a former Army officer in the War of 1812, a farmer, genuine Christian, and church father to several still-existing Christian denominations. He spoke some 3,200 times across America in the 1840’s, mostly at his own expense. I came to respect the man.

Nearby Aurora University was founded by the Advent Christian denomination tied directly to William Miller’s “Millerites.” The school houses many of William Miller’s actual documents. I found it all fascinating. So much so, I plan to visit the university collection soon and some day, William Miller’s house in New York, now a museum.

I want to thank my son Jonathan, for realizing and pointing out to me very early on that William Miller was not a fictional character. That Jon is one smart feller. Creative, too. In fact, he just published his portfolio. You’ll find a link to it in the blogroll on the right. I also want to thank Dr. Susan Palmer, Aurora University’s curator of the document collection including William Miller’s papers. She provided much background information confirming many facts contained in the script I performed, “The End of the Word and After” written by Peter Barnes. Thanks, too, to my director Jim Bruner for turning me loose to creatively contribute beyond the script. Jim let me design and gather the William Miller costume and also let me use onstage a copy of the actual prophecy chart Miller presented in his meetings.

And poor Amelia deserves thanks. She had to listen to William Miller rant and rave many, many times on stage in several performances, in the living room, in the car, the kitchen, and just about everywhere else. And thanks to all of my family and friends who came to see one of the nine performances! It was an incredibly high honor to have you all there. 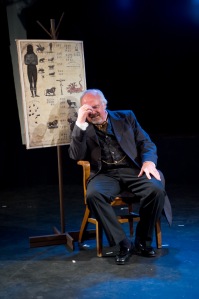 The end of the play is indeed bittersweet. Much of my life was put on hold during the last eight weeks. I’m looking forward to several new creative projects (and a new motorcycle) over the summer and fall. I’m also pretty confident I will do this all again. It was a great experience.

First up, back to my blog! My writing plans for the next few months include re-working fatherlyFIRE, my autobiographical autoethnography. I stopped telling that story way too soon. I want to finish it by rewriting it and publishing it chapter by chapter here on my blog, then gather it all for publication as a book for Apple’s iBooks and Amazon’s Kindle before the end of this year. I’m very excited about that.

I’m also headed back to my banjo. My first priority is to learn to play the song “Wagon Wheel” as recorded by Old Crow Medicine Show. My grand hope is to get Jonathan (and as many of the other “Boggs Boys” who are willing) together to record this song just for fun. You can see my first musical collaboration with Jon in an earlier blog, “Boggs Boys Breakdown.” I’ll try to improve this time. 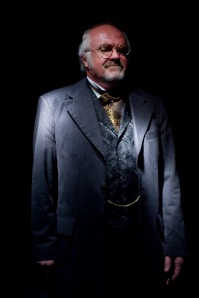 I’m excited about these last three shows. I get to be William Miller three more times (and Roger in Harold Pinter’s “Precisely”). Tomorrow and Sunday, all four of my kiddos will be here, a rare honor and delight. I’d better ice my knee and practice my juggling.

Next year, the theater troupe is doing “Harvey.” I would love to be Elwood P. Dowd. Will they have someone play Harvey, the 6-ft. invisible rabbit? Hmmm.